What is potassium salt aerosol, and how does it work in fire suppression?

This aerosol can be classified as an extinguishing agent belonging to the dry powder category. Due to its characteristics, it is able to effectively extinguish fire outbreaks by saturating the environment.

By definition, an AEROSOL is a system of solid or liquid particles suspended in a gaseous environment. For example, smoke is the visible AEROSOL of the combustion process and appears as particles with a diameter of a few microns. Green Safety Potassium Salt AEROSOL extinguishing agents ("EA") offer a unique method of extinguishing fires. Extinguishing takes place through extremely fine dispersion in the environment, generated by vaporisation and subsequent condensation of the extinguishing substance.
The AEROSOL extinguishing action is carried out by interrupting the fire's autocatalytic reaction chain.

Due to the special chemical composition of the aerosol, it is able to extinguish fire outbreaks, even if not sprayed directly, i.e. by saturation of the environment.

OPERATING PRINCIPLE
An electrical activator placed in contact with the solid extinguishing agent triggers a chemical reaction that generates a gaseous product, the AEROSOL, which is able to condense rapidly into particles smaller than conventional extinguishing powders.
Once released into the environment, it can easily mix with air; the AEROSOL particles then interrupt the combustion chain reaction and quickly extinguish the fire. The effective extinguishing action and lower cost compared to other extinguishing systems are achieved through the use of solid particulate technology.

An extinguishing substance is created by the chemical reaction of a solid material containing an active substance, an oxidant, and a reductant, held together by a neutral binder.
These products are reduced to a very fine powder and amalgamated with an epoxy resin-based binder.
After activation of the solid material, the reaction products are emitted as AEROSOLs, the solid particles of which remain floating in the gaseous medium.

The reaction products consist of 40% solid particles and 60% gaseous products. The gaseous products consist of N2, CO2, CO, H2O and traces of hydrocarbons.
The solid particles are salts of various types depending on the formulation of the solid extinguishing agent; in the case of Green Safety, the salts are potassium-based, such as K2O, K2CO3 and KCl. The size of the particles is in the order of 1–3 microns in diameter at an external pressure of one atmosphere; these particles have an exit velocity from the generator of about 0.1 centimetres per second.

The diffusion losses for these particles are very small; the result is that these particles remain suspended in the protected volume for a time ranging from a few dozen minutes to several hours.

EXTINGUISHING MECHANISM
Effective extinguishment requires that one or more of the four factors necessary for fire development be interrupted, removed or mitigated. These factors and the associated quenching mechanisms are shown in the table below.

Aerosol-related extinction mechanisms have been highlighted with different colours in the table; black indicates total absence, blue indicates low presence, red indicates the prevailing mechanism. The extinguishing agent action manifested by potassium salts in aerosol formation is characterised by a dual component: one physical and the other chemical.
The physical component derives from the tendency of alkali salts in aerosol form to stratify in the environment due to their higher apparent specific weight compared to air. Since alkali salts are inert substances, they effectively hinder the classic fire interactions between fuel and oxidiser.
The chemical component, on the other hand, manifests itself through the creation of remarkably stable chemical bonds between the potassium radicals and the radicals produced by combustion. Aerosol extinguishers, due to the energy released by the activator, undergo rapid oxidation which manifests itself in a change of state – from a solid to a gaseous state – giving rise to free radicals. These atoms have the ability to intercept the other free radicals produced by the combustion chain reaction and interrupt it.
It should be noted that, apart from the anionic portion (bicarbonate), potassium has a very high chain reaction inhibiting power due to its low ionisation potential. In essence, the extinguishing process is very similar to that of Halon. The chemical precursors that interact with the active species are based on alkali metal cations and their associated anions. In the case of GREEN SAFETY, the cation is potassium (K). Alkali metal salts have been shown to be very effective as extinguishing agents. Potassium salts are generally superior to sodium salts, and the anions associated with them are an extremely important factor in the effectiveness of quenching. In powder form, alkali metals must first be broken down in the flame to generate a large specific area for interaction. In order to be effective as an extinguishing agent, the larger particles break down into much smaller particles (microns), reacting with the flames and producing inhibitory species such as alkaline hydroxide (KOH). For decomposition to occur, the time spent in the flames is important. For particles that are too large, the right residence time becomes difficult to achieve because the mass of the particles determines their fall through the flame. In the case of aerosol particles (1 to 3 microns), the residence time required to produce the reactive species is much shorter, and the diffusion property of the small solid particles tends to keep them inside the flame. Obviously, the flame penetration of these particles is a very complex phenomenon that must take into account the density, momentum and convection characteristics of the fire scenario as well as the size of the particles.

INTENDED USE
The potassium aerosol extinguisher is suitable for extinguishing fires in enclosed spaces where the risk is the presence of: 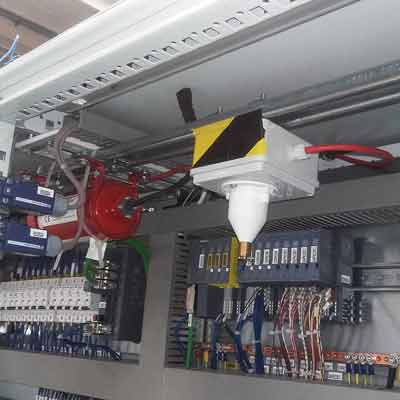 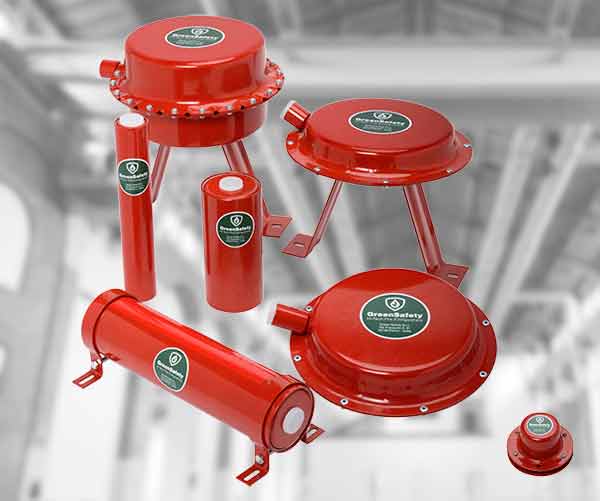 GO TO THE AEROSOL GENERATORS PAGE