The use of the new non-pressurised fire extinguishing dispensers in the construction of automated fire extinguishing systems brings enormous benefits in terms of efficiency and cost savings: less maintenance, simpler installation without piping, no space dedicated to tank storage, dispensers positioned exclusively in the room to be protected, lower cost of the turnkey system, no "collateral damage" to the assets to be protected.

In order to better clarify the features of this innovative fire-suppression solution, an overview and comparison of the various extinguishing systems currently available is necessary...

In the following paragraphs, the main construction characteristics, the required performances and the reference standards, currently applicable, for each of these types of fire-suppression systems will be described.

FIXED POTASSIUM SALT AEROSOL FIRE-SUPPRESSION SYSTEMS
With the ban on the use of halons, many national and international industries have devoted themselves to the study of new replacement extinguishing agents, the so-called "Clean Agents".
The fire extinguishing mechanism of clean agents is attributable to the following main processes:

This system is mainly used for the following installations:

The aerosols, which consist of mixtures of inert gases and alkali metal salts (potassium), exert their extinguishing action by interfering with the combustion reaction, by chemical inhibition on the surface of the solid, accompanied by a smothering action by the inert gas.
The solid phase, which accounts for about 40% by mass of the aerosol, consists of very fine particles that provide a large contact surface area to adsorb free radicals, inhibiting combustion.
In aerosols, nitrogen, carbon dioxide and water vapour are mainly used as inert gases.
The main components of the system are the aerosol generators that generate, through an internal chemical process, a very fine powder that is then dispensed and diffused into the area to be protected.
Aerosols can be used on all fires except for class D (combustible metals) fires and are particularly effective on liquid fires.
Fixed aerosol systems can be of the localised protection type or of the total environment saturation type.
A typical aerosol system consists of a fire detection system and a series of aerosol generators which are linked to the detection system by a specific control and alarm logic circuit.

Mechanical foam systems are conceptually similar to wet foam systems and differ in that they have a foam tank and suitable foam production and discharge systems (foam pourers).
This type of system therefore uses foam as an extinguishing agent.
As discussed in the previous chapters on extinguishing substances, two distinct operations are required to obtain foam, which are carried out in specific sections of the system.
In particular:

The fixed foam system consists of the following characteristic parts:

FIXED CARBON DIOXIDE (CO2) FIRE-SUPPRESSION SYSTEM
The extinguishing action of carbon dioxide is essentially based on the dilution of the oxygen present in the environment, as well as on the cooling action caused by the expansion and subsequent evaporation of this substance when it is dispensed.
Similarly to the systems described above, stationary CO2 systems consist of a storage, distribution and supply section for the extinguishing agent.
The carbon dioxide used in these systems is stored in the liquid state in the appropriate cylinders or tanks.
Depending on how the extinguishing gas is stored, CO2 systems are divided into:
- High pressure;
- Low pressure.
With regard to the methods of intervention, the systems are classified into:
- Total saturation:
- Localized saturation.
High-pressure systems involve storing liquid CO2 in cylinders with a capacity of 30 to 45 kg and a pressure of approximately 50 bar. The cylinders are filled with liquid to about 3/4 of their volume, thereby leaving the remaining part of the free volume for the vapour phase to be used to compensate for any expansion of the liquid.
Low-pressure systems allow higher quantities of carbon dioxide to be stored than is possible with high-pressure cylinders, the number of which cannot be too high in order not to complicate the control and discharge system.
Total saturation systems diffuse gaseous CO2 into the enclosed space to be protected in order to create an atmosphere in the room that further prevents combustion.
The discharge of CO2 must take place in a very short time in order to reach complete saturation in a few minutes.
Localised saturation systems are characterised by the very rapid discharge of a large quantity of CO2 into a space that is not completely enclosed, so that saturation is reached in that area before the extinguishing gas is diluted and diffused into the surrounding environment.
CO2 systems are suitable for paint and varnish production plants, electrical installations, textile machines, etc.
The main limitation for the implementation of this type of system is related to the hazardous nature of the extinguishing agent CO2 for humans.
Indeed, with the CO2 concentrations used for extinguishing fire, the air in the protected environment becomes unbreathable for the occupants due to reduced oxygen concentration.

FIXED NON-PRESSURISED POWDER FIRE-SUPPRESSION SYSTEM
Extinguishing powders are mixtures of finely divided solid particles consisting of organic salts or other natural or synthetic substances suitable for being discharged directly onto fires. There are numerous powders available, some of which are universal and others specific.

Extinguishing Action
The mechanism that determines the extinguishing of a fire, by powders, is a combination of different effects that, when carried out simultaneously, determine the inhibition of the combustion process:

This justifies the great effectiveness and high speed of action of powders, particularly when compared to the limited quantity of substance required to achieve extinction.
Chemical powders are one of the most versatile extinguishing agents; they can be used on fires involving various types of fuel such as wood, paper and even alkali metals such as magnesium.
In any case, for each type of fuel, it is necessary to apply the type of powder capable of best performing the extinguishing function.
In particular, the "polyvalent" powders (based on monoamine phosphates) are suitable for class A, B and C fires.
Monoammonium phosphate powders decompose under the action of heat, leaving a residue which prevents contact with oxygen and thereby prevents reignition.

Mechanism of action
After a thorough study of the state of development of currently used fire-suppression systems and an analysis of their advantages and disadvantages, Green Safety, using the latest findings from the fire-suppression industry, identified the IPEX series of non-pressurised powder dispensers as a state-of-the-art, multi-purpose and cost-effective fire-extinguishing product.

The high performances of the IPEX modules have been obtained thanks to the use of:
- Devices that generate low-temperature gas called cold gas sources (CGS).
- A fine-grained powder extinguisher (guaranteed for 10 years for installation in environments with an ambient temperature range of -50 °C to +95 °С) that extinguishes fire via a dual action method – surface and volumetric).
Green Safety non-pressurised powder dispensers do not use pressure cylinders and pressurisation units, but thanks to the CGS, they generate an extremely fast discharge of the extinguishing agent (less than 5 seconds) to the fire zone, making them suitable for extinguishing fires in both enclosed and open spaces.
Thanks to their ultra-fast discharge, IPEX modules produce a mist of powder during discharge and guarantee a double action of both volumetric and superficial suppression and therefore instant smothering of the fire. Non-pressurised dispensers provide the added advantage of simple installation, low maintenance and the ability to be installed within the area to be protected. This type of dispenser consists of a container which is filled with a dry powder capable of extinguishing class A, B and C fires. Inside the container is a gas generator with an electrical activator. A special membrane is connected with a discharge nozzle to a special flange.

Intended use
The non-pressurised powder extinguishing agent is suitable for extinguishing fires in enclosed environments, the risk of which is constituted by the presence of:

FIXED WATER FIRE-SUPPRESSION SYSTEMS
Fixed fire-suppression systems that use water as an extinguishing agent include the following types of systems:

A fundamental prerequisite for the construction of these types of systems is the availability of water in a sufficient quantity and over a sufficient period of time to satisfy the requirements set by the system design.

FIXED AUTOMATIC SPRINKLER FIRE-SUPPRESSION SYSTEMS
Sprinkler systems are the oldest and most established of the automatic fire protection systems in terms of their design and fire extinguishing methods.
Fixed automatic sprinkler systems are fully automatically controlled systems consisting of networks of pipes installed in the ceiling of protected areas, on which fixed nozzles or sprinklers are mounted.
The piping network inside the protected room originates from the control station, a characteristic element of this type of system, which is installed in a special room, including a control and alarm valve, an interception valve and all the valves and accessories required to control the sprinkler system itself.
Upstream of the control station, we find the piping system that connects the sprinkler system to its water supply.
The water network serving this type of installation is a system of fixed pressurised pipes for the water supply, to which one or more sprinklers are connected.
The networks are installed in order to provide water in adequate quantity to fight the largest fire that can reasonably be expected in the area to be protected.

The water network consists of the following characteristic parts:

The water supplies required by the standard are:

FIXED WATER MIST FIRE-SUPPRESSION SYSTEMS
The fixed water mist systems are extinguishing systems that are based on the use of pressurised water, with a variable pressure from 20 to 200 bar, released by special dispensers that nebulise the drops.
The very fine droplets produced, once cast on the fire, are very quickly transformed into water vapour, thereby creating several simultaneous actions conducive to extinguishing the fire.
Their critical point lies in the relative complexity of the technology, which requires applied quantities, but also carefully defined and implemented pressures and application methods, and above all quality of design and installation.
Furthermore, as the system cannot be tested like a sprinkler, the algae that forms in the stagnant water obstructs the passage of the water along the small pipes of the system.

The water mist system consists of the following characteristic parts: 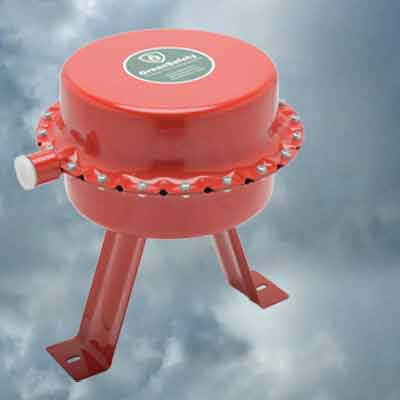 What is the impulsive dry powder